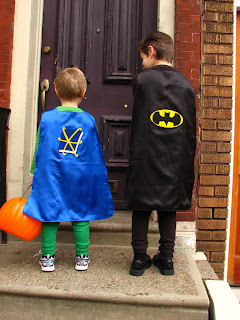 This was the first year my boys have been interested in Halloween. They were scared of costumes in the past or something and who really wants to force a little kid to eat tons of candy? But last year, dad took them trick or treating and they had so very much fun that they finally realized that Halloween is (duh!) pretty cool. This year, I made sure they got costume requests in early. 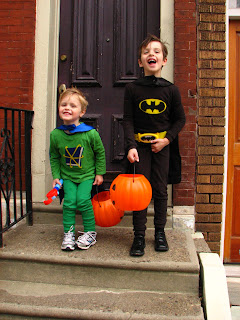 Though I was exhausted after K’s birthday bash, I couldn’t let that stop my boys from properly observing one of the high holidays of childhood. While I left the actual sewing to the last minute, I had a plan for the costumes and had sourced almost all of the materials already. Putting them together wasn’t hard at all. I highly recommend this superhero cape pattern and the free matching downloadable applique patterns. 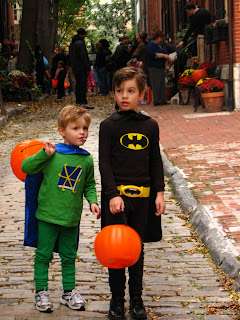 It was surprisingly fun sewing for the boys. I don’t get to do it much. I suppose that sounds more like a personal choice, but it’s just not practical. They are also so hard on their clothes! Why spend the time making khaki cargo pants that I can make neither as nicely as Lands End or as affordably when they’ll just tear out the knees in no time? But costumes I can do far better than most junk out there and the boys loved them! My oldest kept saying “oh, thank you, Mom!” and “I love it, Mom!” and “you do really nice work, Mom!” Can you imagine? Melt. 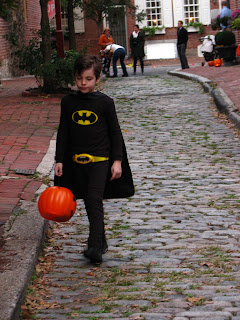 Then I volunteered to go read a spooky story to my son’s kindergarten class and suddenly Catherine needed a costume too! There was some green sateen in the queue for a play dress and some yellow wool felt left from another project.  I made a Music Box Jumper on Saturday, finishing everything with the machine to save time. It is a play dress, after all, so it doesn’t need any fine finishes. 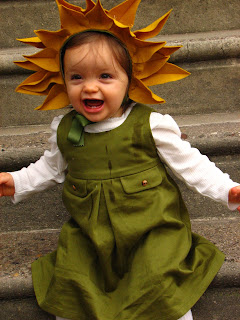 This pattern will clearly become a winter wardrobe staple. There are just four simple pattern pieces (plus flaps) so you can trace and cut quickly. The construction is traditional, so you don’t have to pause to figure out any unfamiliar techniques. It would be easy to add pockets and I would like to experiment with fewer buttons at the back. There are a lot of possibilities – piping would be nice, as would some ribbon or embroidery. In corduroy or wool, it would add nice warmth to winter layers. In velveteen or voile it could even look fancy. And of course it looks great as is, but I’m a sucker for an inverted pleat. 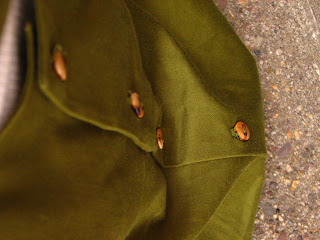 Sunday, I tackled the costume part. At first, I planned asort of petal necklace but then thought it would be nicer if the petals framed her sunny face. I considered wire or interfacing and then copied this very helpfulproject on the purl bee, opting for a hood instead of a headband. I used McCalls 4478 for the bonnet in scraps from the jumper and lined it with cotton flannel for warmth. Then I topstitched two rows of petals to it by machine. It was a little fiddly, but it ultimately saved me time. I tacked the petals together halfway up to help them stand up. 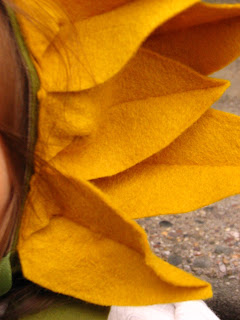 I’m pretty pleased with the result, but it doesn’t take much to make this cutie shine! 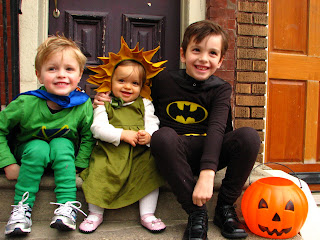 Hope you had a happy Halloween too!
Posted by Melanie